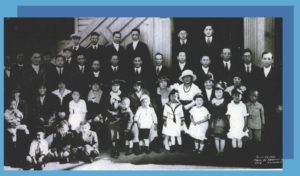 Friendship Society (“Chin Mok Hui”) was the first Korean organization to be established on the mainland US. Founded in 1903 by Ahn Chang-ho, Rev. David Lee and other early leaders, the Friendship Society was a supportive organization with a mission to promote the fellowship and mutual assistance among Korean immigrants.

Korean Mission (present-day San Francisco Korean United Methodist Church) was the first Korean church on the mainland US founded in 1905. Its 55 church members started meeting in a residential home at 521 Page Street. 23 members came from Vacaville, 17 from San Francisco and 15 from Sacramento. For the early immigrants, the church served not only as a place of worship but a critical social hub where they could share resources and support each other. The church published a monthly magazine Dae Do (or “The Korean Evangel”). 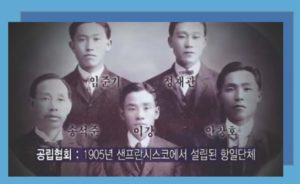 Gongnip “Hyup Hui” Association (aka “Mutual Assistance Association”) was founded in 1905, as the first Korean political organization on the mainland US. The establishment of Gongnip Association was in direct response to Japan’s declaration of Korea a protectorate that same year. Its core mission was to resist against Japanese aggression.

Gongnip Association expanded quickly through six regional centers connecting Korean immigrants in California and as far as Boise, Idaho, and Rocksprings, Wyoming. The organization also published the first Korean newspaper on the mainland US, the Gongnip Shinbo (or “The Korean News”). 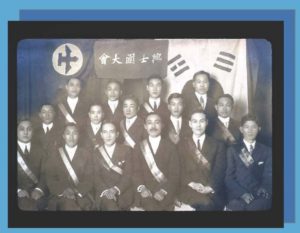 Heung Sa Dahn (aka “Young Korean Academy” or “YKA”) was founded in 1913 in San Francisco by patriot and moralist Ahn Chang-ho. The group embodied Ahn’s lifelong mission of developing future Korean leaders through self-cultivation. Ahn believed that the enlightenment of the Korean people intellectually, ethically and in democratic values, was essential to achieving Korea’s independence and progress as a nation. YKA still exists and Ahn’s guiding principles continue to inspire its members in Korea and in the US.

COMMUNITY SERVICE AND ADVOCACY WORK OF THE KNA 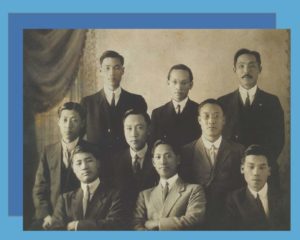 Ahn Chang-ho and Rev. David Lee (back row, right and middle) with the educators at the Korean Student Training Center in Claremont, California, circa 1915 or 1916. Per a historical transcript, the KNA also provided boarding for recent arrivals in Claremont. Courtesy of the Korean American History Museum, Los Angeles.

Korean National Association (“Dae Han In Kuk Min Hui” or “KNA”) was founded in 1909 and headquartered in San Francisco. The KNA constituted the consolidation of all of the Korean organizations on the mainland and in Hawaii. Soon enough, the KNA became the representative of all Koreans in America and the leader in the anti-Japanese movement. Its weekly newspaper Shinhan Minbo (the “New Korea”) was a critical source of information for the community. The KNA had chapters throughout the US and in Korean communities as far as Russia, Manchuria and Mexico, and operated until 1988.

The trial of Jeon Myung-un and Jang In-hwan, both San Francisco Koreans, triggered the establishment of the KNA. Jeon and Jang were indicted for the shooting death of American diplomat Durham Stevens, a Japan loyalist who had publicly defended Japan’s protectorate over Korea. While Jeon and Jang were accused of a grave crime, the Korean community was moved by their patriotism and wanted to provide the best legal defense for them. The KNA provided the organizational leadership in fundraising and in hiring the legal team that led to Jeon being acquitted and Jang avoiding the death penalty. Jang was sentenced to 25 years.

In the Hemet Incident in 1913, a group of Korean fruit pickers arrived at the Hemet train station to work at a local orchard when they were chased away by a mob of anti-Japanese residents. The residents had mistaken the Koreans to be Japanese. The Japanese Association of Southern California offered to help the fruit pickers declaring “Corea is a Japanese dependency.” However, the KNA declared that the fruit pickers were not Japanese because they left Korea before the Japanese annexation. Rev. David Lee, as president of the KNA, argued this position to the US Secretary of State and from that point, the KNA was recognized as the representative of all Koreans in America.

At the Angel Island Immigration Station, Rev. Lee served as a port interpreter and helped many Koreans, including guaranteeing that they would not become “public charges.”

The early Koreans’ fundraising records were remarkable given that most Korean immigrants during this period were laborers who made a mere $1.50 to $3 a day. The impressive results reflect how united the Koreans in America were in their opposition to Japan. 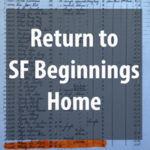 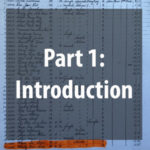 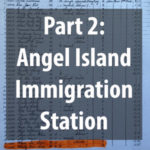 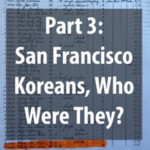 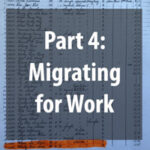 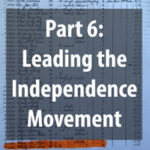 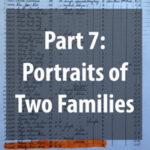 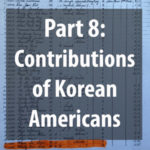 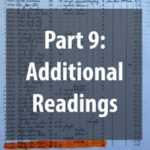 Copyright © 2020 by Rosemarie Nahm.  All photos in this exhibit were approved for use solely for this exhibit and may not be used for any other purpose.