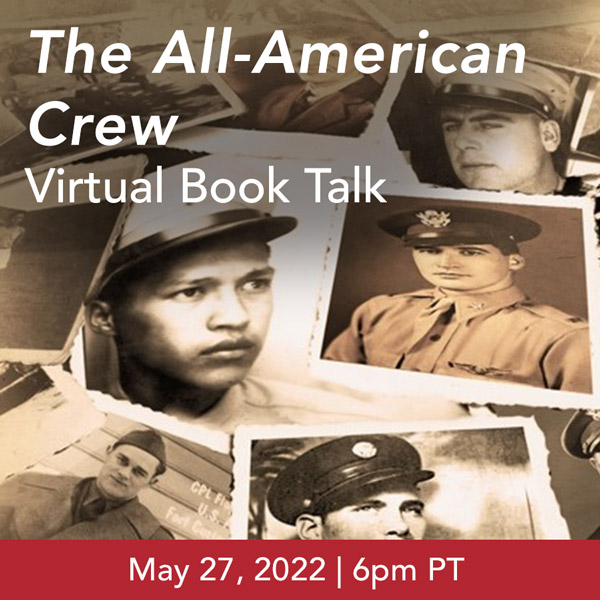 How the Early Chinese American Experience Shaped the Greatest Generation

“…Low is a talented storyteller who has woven engaging family tales into a greater American story of ten men from different lives and backgrounds who went to war and bonded into a tight crew, symbolic of an America that is uniquely able to forge strength from diversity.”
—Ted Gong, Executive Director and Founder, 1882 Foundation

Join this virtual book talk to hear from author Russell N. Low about his second novel, The All-American Crew. On January 23, 1943, a B-24 Liberator bomber and its crew of ten men disappeared without a trace in New Guinea. Their families never knew what happened to them. Now, 80 years later, their long-forgotten letters and dusty photographs finally tell their story in Russell’s new narrative nonfiction work.

The All-American Crew presents Ah Ying’s grandsons, Loren and Stan, who enlist in the Army Air Force and go off to the Pacific to fight for their country’s freedom. Their heroic struggles in New Guinea and Saipan offer a personal look at the assimilation of Chinese Americans into fighting crews and units that included young men from every cultural and ethnic background. This novel is a sequel to Russell’s first novel, Three Coins.

Donations are appreciated and no one will be turned away for lack of funds.
About the Author
Russell N. Low is the nephew of Stanley Low and a California-born fourth-generation Chinese American physician. Low is the author of Three Coins, which tells the story of his great-grandmother Ah Ying, who was enslaved as a child and trafficked to California, where she escaped from slavery with the help of her future husband, Hung Lai Wah, a worker on the transcontinental railroad. The story of Ah Ying, Hung Lai Wah, and their descendants has been featured on the History Channel, BBC Radio, National Public Radio, and the Voice of America, and is included in the California State Railroad Museum and the Smithsonian Museum of American History.