Lotus Link Up: Cocktails, Comedy, and Connection for AAPI & ALLIES

Lotus Link Up: Cocktails, Comedy, and Connection for AAPI & ALLIES 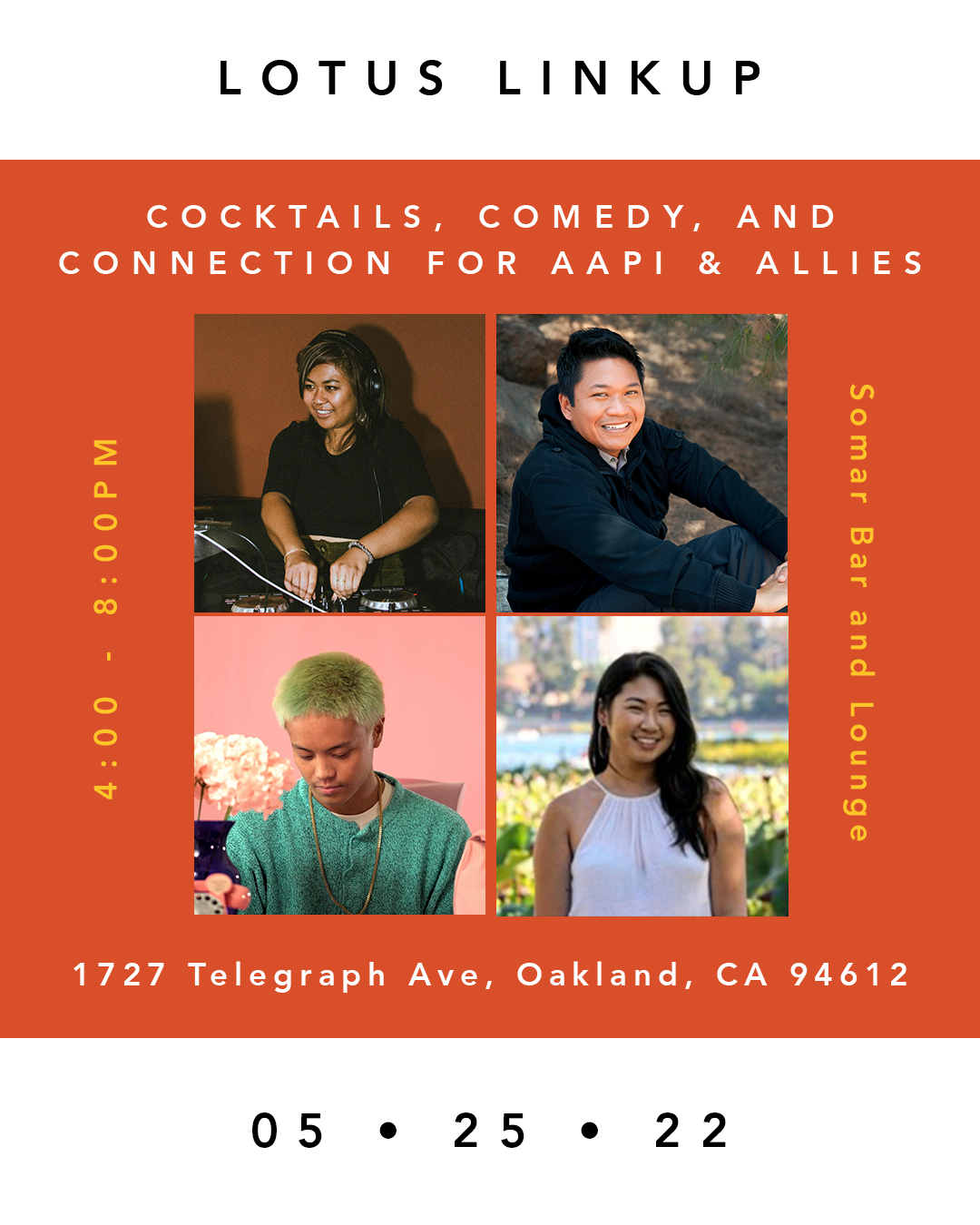 Raffle tickets will also be sold at the event for the chance to win great prizes, including:

Support OACC while enjoying innovative cocktails at local hotspot, Somar Bar & Lounge. Free to attend with a portion of all drink sales donated to OACC. Bring your friends and colleagues!

* This event is part of OACC’s new Lotus Link Up — connecting AAPI & Allies young professionals in the East Bay — to create and connect while exploring Oakland’s vibrant food and drink scene.

“Trixamillion is an open format DJ born and raised in the Bay Area playing at your neighborhood bars and clubs in San Francisco, Oakland, San Jose, and beyond. Not only can she party rock a crowd, but has even played for non-profits, corporations, and weddings. Some of her favorite genres to mix are R&B, House, Afrobeats, and eclectic remixes. She represents Cuffin: All Thangs R&B Party, San Jose and Ladies 1st DJ Club, Bay Area. You can catch her spinning virtually on Twitch or locally in the Bay Area.”

Honolulu, Hawaii comedian, actor and personality, Shawn Felipe is known for his laconic and clever real-life stories as they expand internationally. His Live, Stand -Up Comedy stretches around the globe from the USA to Countries overseas such as Singapore,

Canada, Japan, Korea and the Middle East. He is no stranger to colleges and university’s Nationwide along with adding color to an array of corporate industries. Performance has earned him a nomination for Best New Artist in the Hawaii Music Awards; Best Take Out Comic in Hawaii; And the Most Recognized Comedy Competition in the USA. Shawn was also noted the Top 7 Comic at the World renowned 36th Annual San Francisco International Comedy Competition.

Shawn’s Stand-Up Comedy has been featured on various international networks including WorldAsia TV, AZN TV, IA TV, TFC Channel, Sprint Comedy, Time Network, and National Lampoons Comedy Radio.  Shawn has also been a guest star on NBC’s cop TV series “Hawaii” and has been on several national commercials. Not to forget mentioning, Shawn was a part of a team to win first place on Food Network’s “The Great Food Truck Race!” He and his team, Aloha Plate, won $50k and a State of the Art Food Truck that is now in operation.

Stephanie Hoang was born and raised in Oakland, CA in the San Antonio neighborhood. She graduated from UC Berkeley, majoring in Social Welfare and Asian American & Asian Diaspora Studies, and has worked in restorative justice, youth development, and education. Serving as an Oakland Asian Cultural Center Board Member, she is also an Academic and College Counselor in East Oakland, preparing high school students for college and career opportunities. She is committed to amplifying the voices of young people, and building understanding across generations and cultures with an anti-racist framework. In her spare time, she enjoys arts and crafts, photography, filmmaking, and (eating, sometimes cooking) food.

Bay Area artist Vince A is a Filipino singer/songwriter and producer who has recently started his solo career after his departure from the Hip-Hop group he founded known as “The Lychee Boys”. He felt that writing and producing songs for himself rather than a group was more spiritually fulfilling, allowing him to put his whole heart into his music. His writing and production were recently acknowledged when music.com chose his song, “Understand” by The Lychee Boys, to be mixed by Sony out of 800+ submissions. His focus on his music now goes beyond writing the average catchy love song, hoping to communicate the message of “you are not alone, more people are dealing with the same situation than you think and you’ll be ok”. While still writing catchy hooks and memorable punchlines, he is able to honestly convey strange but relatable experiences in a way that is easily listenable yet powerful.