Swimming to Freedom Book Talk with Kent and Freddie Wong

Swimming to Freedom Book Talk with Kent and Freddie Wong 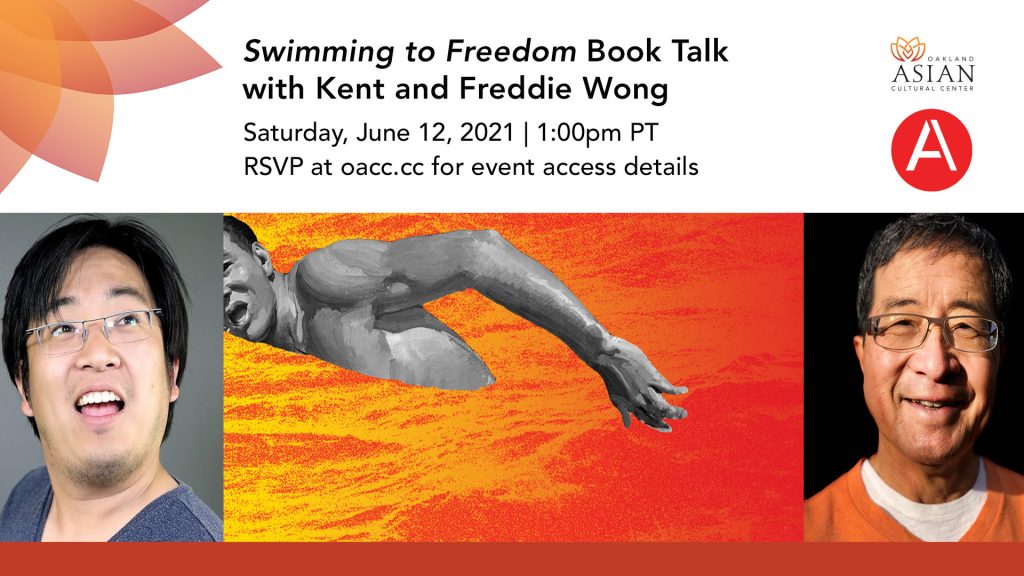 Join us for a special celebration of Kent Wong’s debut publication, Swimming to Freedom: My Escape from China and the Cultural Revolution, a memoir of a childhood amid revolutionary times and a moving testament to the human spirit. Kent will be joined by his son, Freddie (2014 Webby for Film and Video Person of the Year), for a father-son conversation exploring Kent’s journey and the making of this book.

This event is presented in partnership by the Oakland Asian Cultural Center and Abrams Books. Special thanks to Mustard Square for supporting this event as well. It is FREE and donations are greatly appreciated. No one will be turned away for lack of funds.

About Swimming to Freedom

When Wong was a young boy, he lived in the newly established People’s Republic of China. His father was a patriotic Chinese official, hailed as a hero. But as the Cultural Revolution closed schools, plunged the country into chaos, and scattered Kent and his sisters to disparate villages where they struggled to eke out a bare existence, Wong realized he had no future in China. Years later he joined a dissident underground group and heard about fellow countrymen braving extraordinary hardship to reach freedom by swimming across miles of open water to Hong Kong. Wong decided to risk his life for a better future; in 1974, he joined an estimated half million “freedom swimmers” who risked everything to escape hardship and oppression.

In 1974, Kent Wong escaped the Cultural Revolution over water to Hong Kong, and shortly after moved to the United States as a refugee. He earned his bachelor’s degree at the University of Washington, his MD at Harvard Medical School, and after a residency at Stanford, he practiced as an anesthesiologist. He is now retired and lives near Seattle. His son, Freddie Wong, is a successful filmmaker, musician, VFX artist, podcaster, and competitive gamer, with a YouTube channel with over 9 million subscribers.

As an online video pioneer, Freddie Wong was featured in Forbes’ 2015 30 under 30, Hollywood Reporter’s Silicon Beach Power 25, and won the 2014 Webby for Film and Video Person of the Year. He co-directed the award-winning series Video Game High School, as well as Hulu’s RocketJump: The Show, and Dimension 404.