Community safety starts with us.

OACC invites you to join a mini-concert and conversation with artists, activists, and community organizers to re-imagine what safety can look like for our communities. We’ll open with an exclusive performance featuring jason chu and Alan Z, lead artists of the Face Value album. After the performance, they will join a conversation with Oakland-local community representatives:

The recent attacks on Asian Americans are not new – they’re rooted in a long history of white supremacy and xenophobia that pits Asian Americans against other people of color, and scapegoats us in times of crisis. For generations, Asian immigrants and refugees built cultural communities alongside other working class communities of color in Oakland. Neighborhoods like Chinatown and Eastlake became landing places for new immigrants, havens for families to raise kids and grow old. But over the past few decades, our communities have been destabilized by the growing gap between rich and poor, skyrocketing housing costs, and deep budget cuts to our schools and public services.

This month, the Oakland City Council is set to vote on whether to throw even more money into policing that further destabilizes our communities or whether to pass a People’s Budget that puts our tax dollars where we need it most – into housing, critical public services, mental health, arts, and youth services. Community safety starts with us: building trust and connection, repairing past harms, and having each other’s backs.

This event is supported in part by APEN, OCA-Asian American Advocates’ East Bay Chapter, and AYPAL. It is FREE with suggested donations greatly appreciated to support our programs and partners. No one will be turned away for lack of funds. 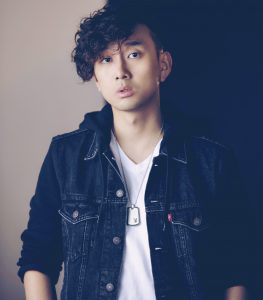 Rapper/Activist jason chu (image left) speaks hope and healing in a broken world. He blends crafted lyricism with high energy performances. Most recently, jason’s work has been curated in the Los Angeles Department of Cultural Affairs virtual exhibition Reimagine Public Art: House and Home. His music has been heard on Warrior (HBO Max), Snowpiercer (TNT), and Wu Assassins (Netflix). He has shared poetry at the Obama White House, been featured in the Chinese American Museum of Los Angeles, and presented at the Getty Center, Flushing Town Hall, the Nate Holden Performing Arts Center, and the Museum of Chinese in America.

A triple threat in the entertainment industry, Alan Z (image right) intricately weaves hip-hop aggression, R&B melodies, and pop sensibilities into a tapestry that defines stereotypes and labels. He is a mainstay in the Atlanta scene with a national audience garnered from performing coast-to-coast and generating viral attention on Instagram, TikTok, and Facebook. His music has been heard on Wu Assassins (Netflix), iZombie (The CW), and eSports Athletes Rising (Fox Sports 1). Alan Z has worked with several prominent artists, including Full Force, Raphael Saadiq, and Shanice Wilson.