Love Me As I Am: How to Have an Inter-generational Conversation on Beauty Standards and Self-Worth

Love Me As I Am: How to Have an Inter-generational Conversation on Beauty Standards and Self-Worth 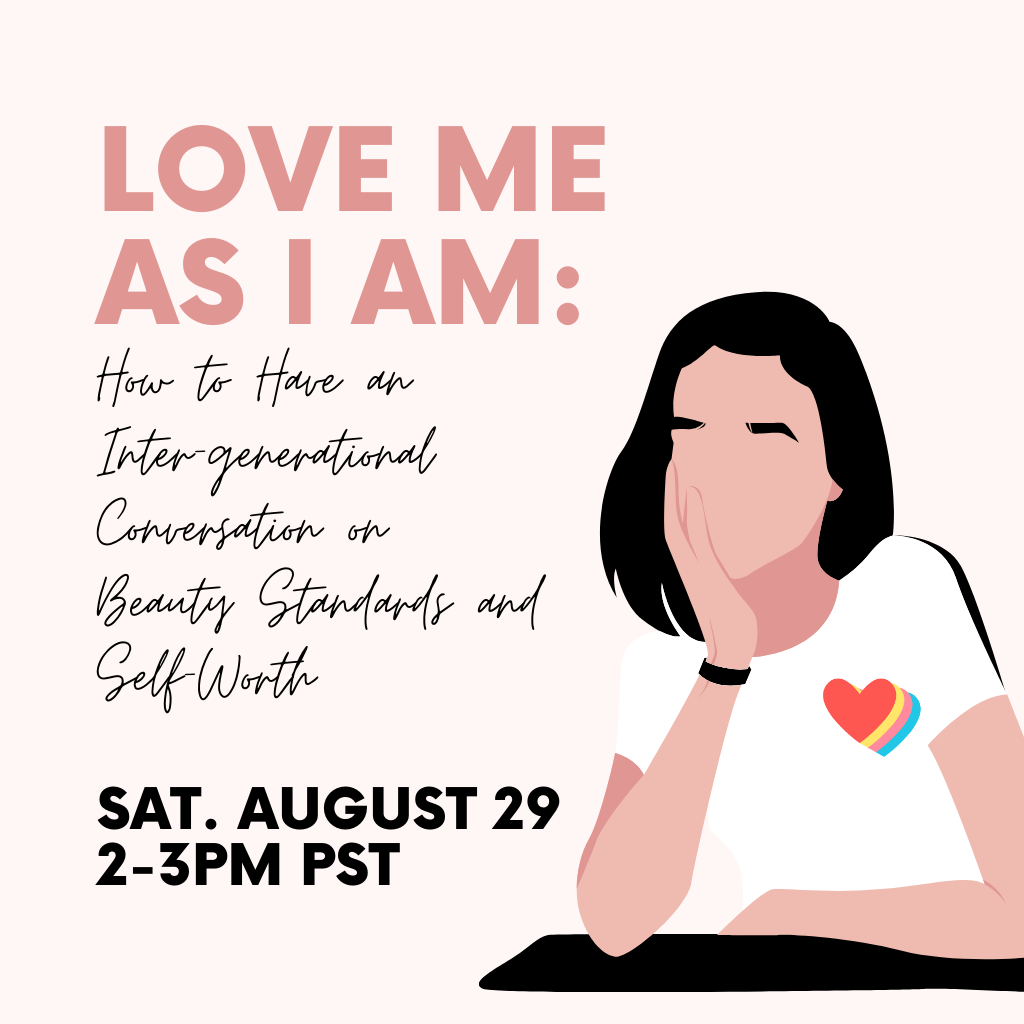 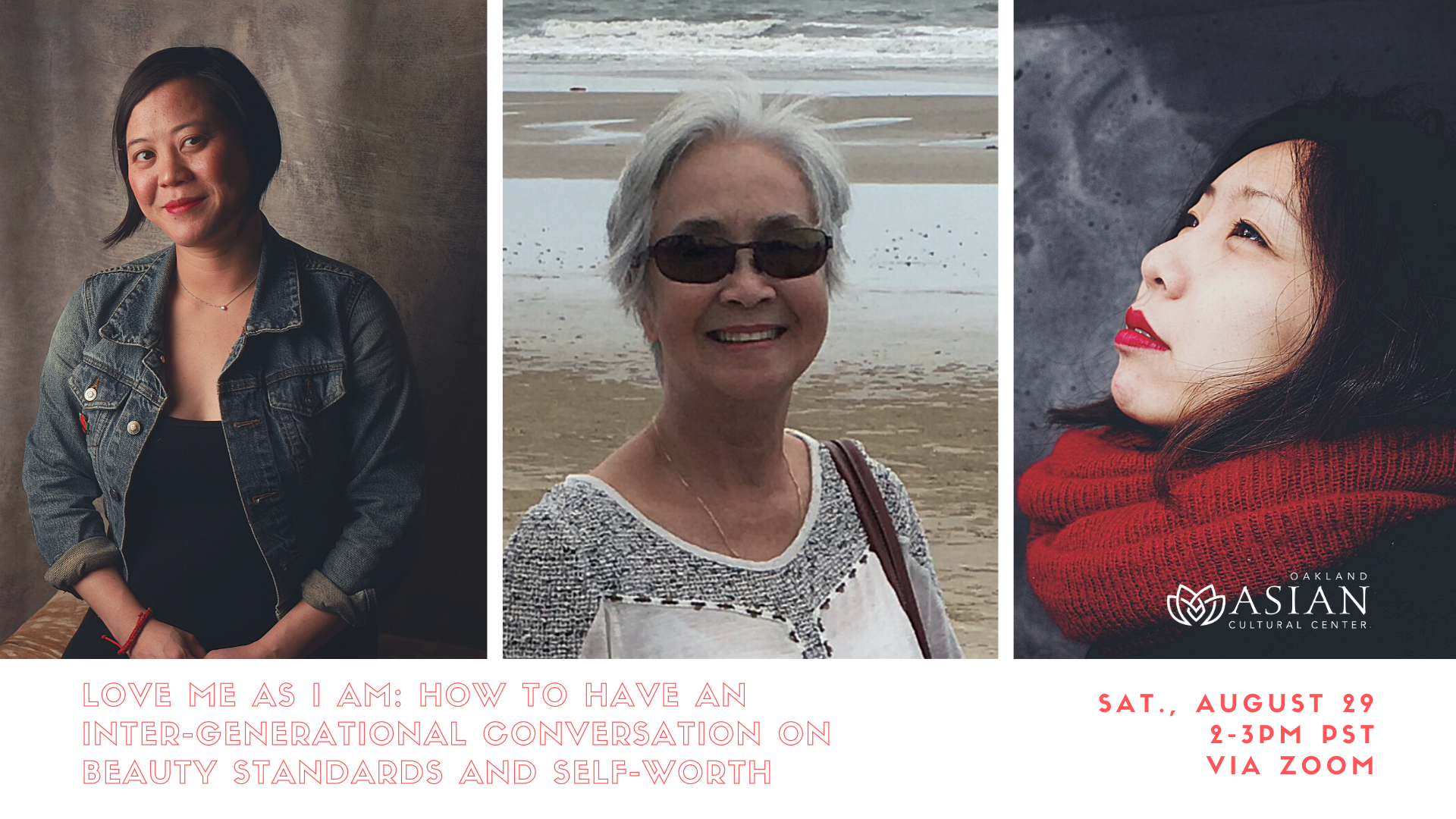 Love Me As I Am: How to Have an Intergenerational Conversation on Beauty Standards and Self-Worth

You look fatter than last time — have you eaten yet? Criticism and ironic love all in one sentence — or is it? Join Susan Lieu, Cindy Nguyen, and Nelly Nguyen as they break down real Asian American family conversations, their meanings across generations, and practical tools to navigate sad awkward conversations with a hope of emotional connection.

On Saturday, August 29th, OACC will host a preview of the 140 LBS with a virtual panel discussion on beauty standards, self-worth, and how to come out of a conversation feeling more closer. Inspired by the themes conveyed in 140 LBS, the panel will examine the tension in parent-child communication and share tools to improve relationships while maintaining healthy boundaries.

Nelly Nguyen, a retired CM analyst, Vietnam War refugee, and mother of Thi Bui, author of The Best We Could Do

OACC is excited to bring “140 LBS: How Beauty Killed My Mother,” to a broader API audience through a virtual screening event hosted on Saturday, November 14. The solo theater work is written and performed by Susan Lieu, a first-generation American born to Vietnamese refugees. The performance weaves together several through-lines: inter-generational trauma; parent-child relationships; body insecurity and shame; repression and healing from personal loss; lack of accountability in the medical system; Vietnamese folkloric practice of spirit channeling.

Read more about the speakers: Susan Lieu is a Vietnamese-American activist, playwright, and performer who tells stories that refuse to be forgotten. With a vision for individual and community healing—made possible through the interplay of comedy and drama—her work delves deeply into the lived realities of body insecurity, grieving, and trauma. Her first theatrical solo show, “140 LBS: HOW BEAUTY KILLED MY MOTHER” is the true story of how her mother died from plastic surgery malpractice when Lieu was 11 years old and her search to find her mother’s killer. Susan self-produced a nearly sold-out 10-city National Tour with press from L.A. Times, NPR, The Washington Post (The Lily), NBC News, American Theatre, and The Seattle Times. Lieu has performed her show and its sequel 51 times to 6000 people in the past year. Her work has been showcased with The Wing Luke Museum, The Moth at Benaroya Hall, On The Boards, and Bumbershoot. Susan has a BA from Harvard, an MBA from Yale, and is the co-founder of Socola Chocolatier, an artisanal chocolate company in San Francisco. Cindy Nguyen is an artist-historian who works between film, poetry, and visual narrative. Her scholarship and art defies dominant narrative and meditates on the subtle textures of translation and memory. Her current multimedia project, “Mẹ [Mom], Translated” explores intergenerational language and love. Nguyen’s other major project includes MISS/MIS, a feminist exploration of all things deemed ‘mis-’ –wrong, dirty, or defiant. Her art experiments on translation, categorical impulses, and misreading emerged from her Ph.D. at UC Berkeley on Vietnamese libraries and print culture. Her essays, poetry, and film have been published in PANK Magazine, Diacritics, Ajar Press, and the Viet Film Festival. Nguyen’s scholarly research has been funded by Fulbright, Social Science Research Council, and the National Academy of Education/Spencer. With funding from the Brown Arts Initiative, Nguyen is currently producing a poetic documentary film on the language of Vietnamese refugee remembrance and history. As a postdoctoral fellow, she currently teaches Southeast Asian history at Brown University. Nelly Nguyet M. Nguyen came to the U.S. over 42 years ago as a refugee and successfully rebuilt her life through a number of career transitions while raising her family of four children as well as caring for her husband. Now a retired CM analyst, Nelly lives in California’s Bay Area and enjoys her golden years as a mother and grandmother. Born in Cambodia to Vietnamese parents, Nelly was raised in pre-Communist Vietnam and attended French private schools throughout her childhood. After graduating from the renowned French prep school Lycee Yersin de Dalat, she went on to the University of Pedagogy of Saigon and received her Bachelor degree in 1965, specializing in French literature. She taught French at high schools all over South Vietnam until the country fell to Communist rule in 1975. An idealist who believed in the idea of a de-colonized Vietnam, Nelly remained in the country and continued to teach through the regime change. Three years later, having experienced the economic and social decline of the country and seeing no future for her children, she sought the chance for freedom and escaped Communist Vietnam by boat, bringing her entire family with her. (The family’s refugee & immigrant story is depicted in the graphic novel The Best We Could Do, by Thi Bui, Nelly’s youngest daughter.) Adapting to life in America was not without struggles and challenges, but Nelly was resolute in her aim to provide her children with a life of opportunities. As is the case with many other immigrants, she managed to overcome the numerous difficulties with hard work and dedication, eventually learning to thrive in a rising career. When she looks back on her life now, Nelly sees her ultimate achievement in her children. To have raised good human beings who are compassionate, intelligent, active in their lives and their communities – this is her definition of success and a dream realized. Terri Le has been OACC’s Development Manager since September 2019. As a first-generation Vietnamese American, Terri has a demonstrated history of working in the museum and nonprofit field in the San Francisco Bay and Washington, D.C. Metropolitan Area. For over ten years, Terri has worked at notable institutions including the U.S. National Archives, The Phillips Collection, Glen Echo Park Partnership for Arts and Culture, VisArts at Rockville, CalShakes, Charles M. Schulz Museum, San Francisco Heritage, the Diasporic Vietnamese Artists Network (DVAN), and the Asian Pacific-Islander Americans in Historic Preservation. Passionate about civic service in the arts, culture, and humanities field, she has an M.A. in Museum Studies and M.B.A. focused on Nonprofit Organizational Leadership from John F. Kennedy University.