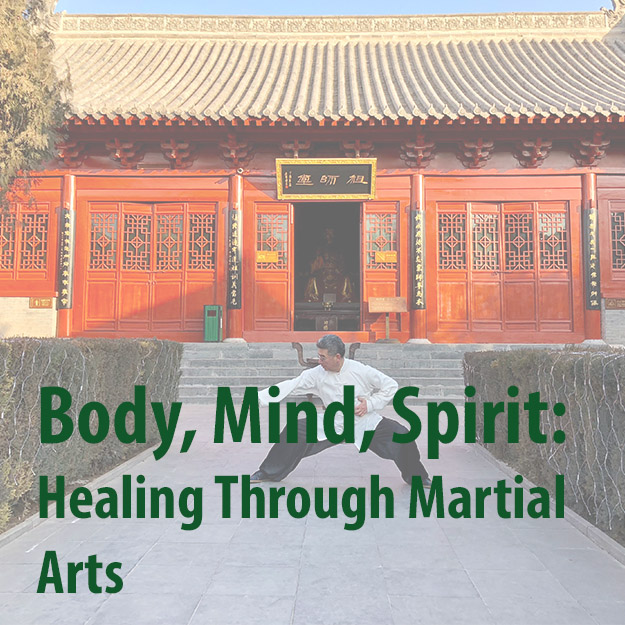 Three masters of Wushu “Chinese Martial Arts”—Sifu Bryant Fong, Sifu Johnny Jang, and Sifu Steven Chan—will discuss how Wushu nourishes the mind, body and spirit in terms of Traditional Chinese Medicine. They will demonstrate internal and external styles in clear terms so that you can decide which forms may suit you. These three masters have generously shared their love of Wushu with generations of students. Learn from them how the correct body form, intention, and natural movement can improve your health.

Sifu Bryant Fong, head coach of the UC Berkeley Wushu program and founder of the Cal Chinese Martial Arts Tournament, has immersed himself in traditional Chinese martial arts beginning in the 1980’s. He will describe the health benefits of different styles and how he has chosen the forms he practices today.

Sifu Johnny Jang has taught Wing Chun and a wide range of internal forms, including weapons, in the Bay Area since the 1980’s. He was national TaiChi champion in the late 1980’s. Like Sifu Fong, he has traveled extensively in. China to learn directly from traditional masters.

Sifu Steve Chan has distilled his longtime practice of Bagua and Chen TaiChi into the essence of Wushu, that is, the gathering and circulation of life force through the body. His practice is focused on the very basics of Dai Xinyiquan, Che Xingyiquan and Chen Taijiquan – almost exclusively on basic physical health and strength training from collecting and circulating qi in basic moving exercises (neigong). He will present “Neigong: A direct path to training strength and vitality from Chinese internal martial arts. ”

Martial Arts for Health — Seminar with Instruction
Here is the final program for this Saturday’s event.  In addition to lectures and demonstrations of martial arts, the masters will offer instruction to the audience so that you can take your knowledge home.
2:05   Introduction to Yang Style Taichi
2:15   Steve Chan

How martial arts training enables you to improve your life force
Audience instruction: Harnessing energy through intention
2:45   Sifu Bryant Fong
The various forms of martial arts and how you may benefit regardless of your age
Wushu demonstration by members of the Cal Martial Arts team
3:30   Sifu Johnny Jang
Water Boxing — a form that synthesizes the principles of martial arts by integrating four disciplines
Yang sword demonstration
Audience instruction: Eight Pieces of Brocade

REGISTER NOW: ($3-5 suggested donation, no one turned away for lack of funds)