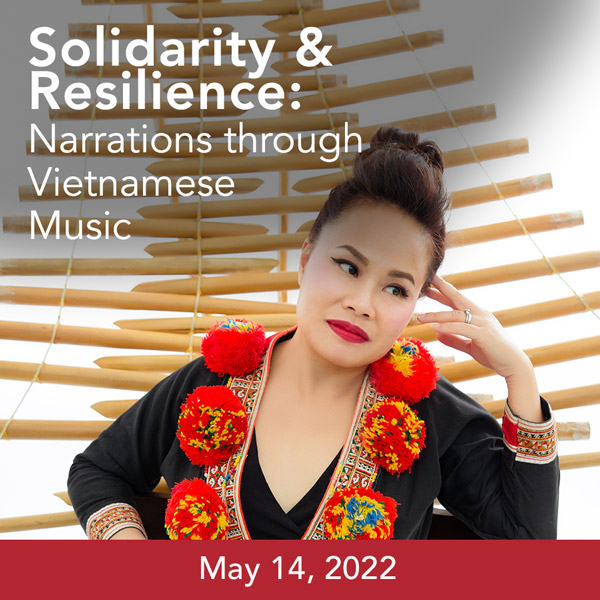 The “Solidarity and Resilience” concert is a commemorative reflection of April 30, 1975. It is a date often remembered poignantly – as a loss – by those of Vietnamese descent. As an important contrast to that loss, the goal of this concert is to offer several snapshots of inspiration, strength, and resilience. We will encourage audiences to reflect on the past and offer young people suggestions of how, where, and what inspiration and resilience can be. Vân-Ánh will perform with the genre-bending musical collective Blood Moon Orchestra.

This program is supported in part by the National Endowment for the Arts and the Hewlett Foundation.

About Vân-Ánh Võ
Vân-Ánh Võ has dedicated her life to the practice and performance of Vietnamese traditional instruments, creating music by blending the wonderfully unique sounds of these instruments with other music genres and fusing deeply rooted Vietnamese musical traditions with fresh new structures and compositions. Since settling in the San Francisco Bay Area in 2001, Vo has seen the beauty and strength in the music of other cultures, and especially as they come together. And as a result, she has focused on collaborating with musicians across different genres to create new works that use music to bring these cultures together.

About the Blood Moon Orchestra
Vân-Ánh Võ’s Blood Moon Orchestra is a genre-bending musical collective that defies the bounds of Vietnamese traditional music, hip-hop/rap, and breakdance. All master musicians, members of BMO have an innate ability to blend very different sounds together, creating surprisingly new and fresh musical dialogues. Beginning back in 2015 as an initiative by RIGHTSTARTER (drummer/producer PC Muñoz and rapper DEM ONE), current director/composer Van-Anh took over the creative directorship in 2017. BMO concerts address social issues, critically engage with underserved communities on issues of our times, and bridge cultures and generations through traditional music. In 2019, BMO was a headliner and provided workshops to 12,800 audience members for BridgeFest Vietnam, which aimed to foster dialogue surrounding diversity and equality.

About Alexander M. Cannon
Alexander M. Cannon, Ph.D. is an ethnomusicologist and Associate Professor of Music at the University of Birmingham (UK). He is a researcher of the musical traditions of southern Vietnam, including don ca tai tu (music for diversion), and musics of the Vietnamese diaspora. He has published widely in academic journals and has a new book titled Seeding the Tradition: Musical Creativity in Southern Vietnam released by Wesleyan University Press in 2022.