Join us on the eve of the 80th anniversary of Day of Remembrance for a virtual screening of acclaimed documentary, MANZANAR, DIVERTED: WHEN WATER BECOMES DUST, followed by a live dialogue with the filmmaker and special guests. From the majestic peaks of the snow-capped Sierras to the parched valley of Payahuunadü, “the land of flowing water,” MANZANAR, DIVERTED: WHEN WATER BECOMES DUST poetically weaves together memories of intergenerational women. Native Americans, Japanese-American WWII incarcerees and environmentalists form an unexpected alliance to defend their land and water from Los Angeles. Among its many accolades, this film world premiered at the 2021 Big Sky Documentary Film Festival and was featured as the Centerpiece Film at CAAMFEST where it also received Honorable Mention. It was nominated for Best Music Score in the IDA Documentary Awards. Directed and produced by Ann Kaneko. Produced by Jin Yoo-Kim. Run time: 84 minutes. Learn more about the film at: https://www.manzanardiverted.com/.

The event is presented with support from the Center for Asian America Media.

Donations are greatly appreciated and will support programs. No one will be turned away for lack of funds. 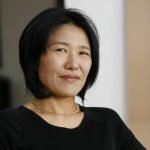 ANN KANEKO (director/producer/editor/cinematographer) is known for her personal films that weave her intimate aesthetic with the intricacies of political reality. She is an Emmy winner, and her work has screened internationally and been broadcast on PBS. She has been commissioned by the National Endowment for the Arts, the California Endowment and the Skirball Cultural Center. Her credits include A FLICKER IN ETERNITY, based on Stanley Hayami’s diary; AGAINST THE GRAIN: AN ARTIST’S SURVIVAL GUIDE TO PERU, highlighting Peruvian political artists; and 100% HUMAN HAIR, a musical for the AFI Directing Workshop for Women. Fluent in Japanese and Spanish, Kaneko has been a Fulbright and Japan Foundation Artist fellow. She is a member of New Day Films, a distribution cooperative. She has an MFA from UCLA, teaches at Pitzer College and is the artist mentor for VC’s Armed with a Camera Fellowship.

JIN YOO-KIM (producer & impact producer) is a Korean Bolivian American independent film producer. She co-produced A WOMAN’S WORK: THE NFL’S CHEERLEADER PROBLEM (dir. Yu Gu, Tribeca ‘19), and K-TOWN ’92 (dir. Grace Lee). She is currently developing her first food docuseries, co-writing a feature comedy, and developing a feature documentary about SPAM. She is a 2020-21 Sundance Creative Producers Fellow, a 2020 Film Independent x CNN Original Series Docuseries Intensive Fellow, and a 2020 Film Independent Doc Lab fellow. She pitched at Big Sky Pitch at Big Sky Film Festival 2020, and was a 2017 Firelight Media Impact Producing Fellow. She received her MFA in Film from USC and a BA in Psychology and Cinema & Media Studies from Wellesley College. 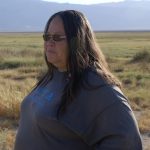 KATHY BANCROFT, Mono, Shoshone and Paiute, is the Tribal Historic Preservation Officer and the Indian Child Welfare Act Representative for the Lone Pine Paiute-Shoshone Tribe. She attended Stanford University, Ft. Lewis College and Montana State University, where she studied organic chemistry (MS), cell biology and neuroscience (PhD). She works with the Alabama Hills Stewardship Board to seek  protection of tribal lands. She is on the Cultural Resources Task Force for the Owens Lake Dust Mitigation Project and the Owens Lake Master Project Advisory Group. She works with groups to fight the destruction of native sacred places.