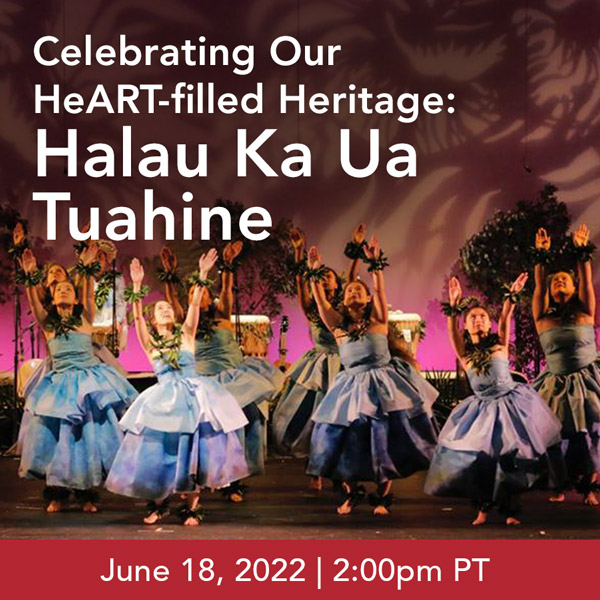 Members of Hālau KaUaTuahine will share the vibrant dances and traditions of Hawai’i onstage at the Oakland Asian Cultural Center. Following the performances will be various interactive workshops for attendees to learn more about hula. Attendees will be asked to pre-register for these workshops through the RSVP form (above).

Construct Your Own Lei Lāʻī
Lāʻī (tī-leaf) is considered to have the ability to ward off evil and encourage positive energy. It is revered as a symbol of divine protection and closely associated with the hula tradition. Lei are symbols of love, honor and continuity. Creating, gifting and wearing a lei lāʻī is therefore an act of deep aloha. Join us in a mini workshop in which you will learn how to weave your own lei lāʻī.

Construct Your Own Kukui Pendant Necklace
The kukui (candlenut) is symbolic of enlightenment and knowledge, as the nut itself can be used as a source of light. For this reason, they are often worn by educators and for ceremonial occasions. In this mini workshop, you will learn how to create your own kukui nut pendant.

Learn Hula Noho (Sitting Hula)
The hula is a dance form which interprets stories, prayers and poems. There are many forms of hula, including one in which the dancer remains seated and conveys the story with their hands, voice, upper body movement and expression. Join us in a mini workshop where you will be introduced to this traditional form of dance.

Hālau KaUaTuahine is an organization dedicated to the study, protection and perpetuation of the performing arts of Hawai’i. It is named after the gentle “sister” rain that falls in the valley of Mānoa in Honolulu. They have presented in performance throughout California and internationally, appearing in venues ranging from the Hollywood Bowl and Kū Mai Ka Hula of Hawaiʻi Island, Maui, Oʻahu and Kauaʻi, to the Heiva celebrations of Tahiti, French Polynesia and Te Papa Tongareva, the National Museum of New Zealand. The hālau will soon celebrate its 30th anniversary.

Māhealani Uchiyama is an award-winning dancer, musician, composer, choreographer, recording artist, author and teacher. She is the founder and director of the Māhea Uchiyama Center for International Dance in Berkeley and is Kumu Hula of Hālau KaUaTuahine. She is the creator and director of the Kāpili Polynesian Dance and Music Workshops. She holds a BA in Dance Ethnology and an MA in Pacific Islands Studies from the University of Hawaiʻi. She trained in traditional hula and Tahitian ʻori under the late Kumu Hula (hula master) Joseph Kamōha’i Kahā’ulelio. Learn more at https://www.mahea.com/.

Donations are appreciated and no one will be turned away for lack of funds.