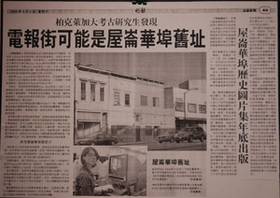 In the 1860’s, before downtown development reached north of 14th Street, early Oakland Chinese pioneers created Chinatown communities in the area of Telegraph and San Pablo Avenue.
Articles from various local Chinese newspapers on the history of San Pablo Chinatown. Click on each image to view. 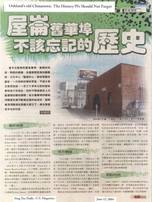 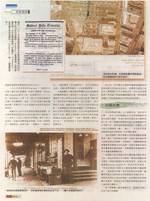 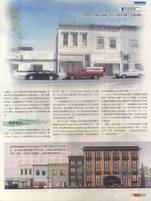 In 1857, the federal government surveyed Oakland. At that time, most of Oakland’s buildings were at the south end of Broadway, where the first town began. The San Pablo Avenue Chinatown pioneers would settle near the pond to the left of Lake Merritt.

USGS Coastal Survey Map of 1857. Click on the image to view. 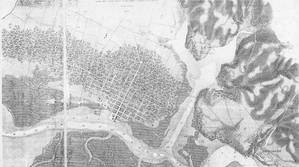 Oaklander Edward W. Chew, son of crusading newspaper publisher Ng Poon Chew (1866-1931), recorded the history of Oakland’s early Chinese pioneers. He published the history in the Oakland Tribune in 1952, in a special article for the city’s 100-year anniversary.

By the mid-1860’s, Edward Chew wrote, “the official ‘Chinatown'” in Oakland was north of town, on the east side of Telegraph between 16th and 17th streets.

Around 1867, a fire destroyed the Telegraph Chinatown. When city authorities prevented them from rebuilding, these early Oaklanders created a new Chinatown along the east side of San Pablo, in an area between today’s 19th and 20th streets. The surrounding land was mostly farmland with some residencies.

Historical documents sometimes give misleading impressions. For example, even the official new map of Oakland in 1868 drew through the Chinatown area roads that would not exist until years later.

When the roads were to be built, the City Council ordered to have all unnamed property owners or tenants who were “in the way” to move, offering these tenants only $1 in compensation. (source: Oakland City Council Resolutions, Volume 1).

Official Map of Oakland, 1868. Click on the image to view. 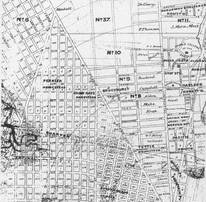 Artist interpretation of Oakland in 1870. Click on the image to view. 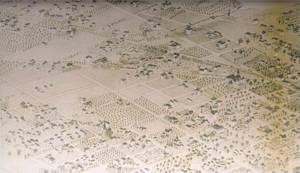 In 1872, City Hall changed locations, moving from a storefront at 8th and Broadway to where it now stands, near the corner of Broadway and 14th street.

A photographer stood on Washington Street to take this picture of the new City Hall’s 14th street side. The area north of the City Hall was still largely rural. 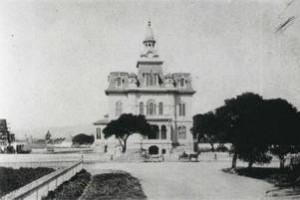 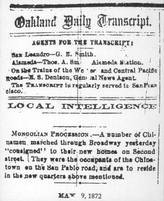 The 1870 census shows San Pablo Avenue Chinatown residents’ first names. According to the census-taker, their occupations included working on the railroad or in the quarry, and running a laundry. At least 23 men worked as independent farmers.

Accusations of “blight”…
It was common at the time for people trying to gain control of real estate in or nearby Chinatown to call it a “plague-spot” or “blight.” This also occurred in the cities of Alameda, Berkeley, San Francisco and San Jose.

Various articles described the Chinatowns as “plague-spots,” “diseased,” and “Black Spots.” Click on the images to view. 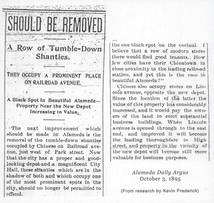 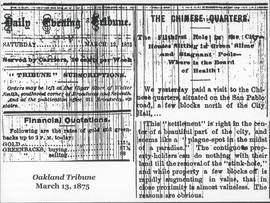 REMEMBERING THEIR STRUGGLE
When city officials of the 1800’s displaced the residents of the San Pablo Avenue Chinatown, they were clearing space for redevelopment that included a fancy two-story Victorian across the street on the west side of San Pablo, a set of plain storefronts, and upstairs residencies on the east side.

Over 125 years later, these buildings still stand, bringing testimony and commemoration of the history of Oakland’s early Chinese pioneers. 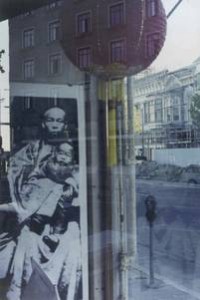 This research was conducted by Anna Naruta, UC Berkeley Scholar in 2005.