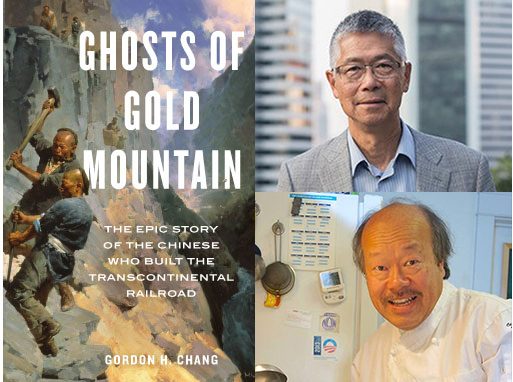 Gordon H. Chang will present a talk about his newest book GHOSTS OF GOLD MOUNTAIN: The Epic Story of the Chinese Who Built the Transcontinental Railroad, a groundbreaking account that draws on unprecedented research to recover the Chinese railroad workers’ stories and celebrate their role in remaking America. An invaluable correction of a great historical injustice, GHOSTS OF GOLD MOUNTAIN returns these “silent spikes” to their rightful place in our national saga. Q&A and a book signing to follow.

Gordon is the Olive H. Palmer Professor in Humanities and Professor of History at Stanford University, where he also serves as director of the Center for East Asian Studies and codirector of the Chinese Railroad Workers in North America Project. Chang is the author of Fateful Ties and editor of four other books. He lives in Stanford, California.

From across the sea, they came by the thousands, escaping war and poverty in southern China to seek their fortunes in America. Converging on the enormous western worksite of the Transcontinental Railroad, the migrants spent years dynamiting tunnels through the snow-packed cliffs of the Sierra Nevada and laying tracks across the burning Utah desert. Their sweat and blood fueled the ascent of an interlinked, industrial United States. But those of them who survived this perilous effort would suffer a different kind of death—a historical one, as they were pushed first to the margins of American life and then to the fringes of public memory.

“The Diet of The Chinese Railroad Builders”

Learn about the culinary findings of the early Chinese pioneers who built the Transcontinental railroad and the birth of present day Chinese American culture. Chef David SooHoo was born in San Francisco to Cantonese immigrants who owned Chinese-American restaurants in Sacramento. With more than 50 years behind the wok, SooHoo was the first chef from Sacramento invited to the Beard House, and most recent personal chef to Barron Hilton at his Venice Island Duck Club located in the reclaimed swampland of the San Joaquin Delta by the Chinese after the gold rush.

This program is co-sponsored by Oakland Asian Cultural Center and Eastwind Books of Berkeley.